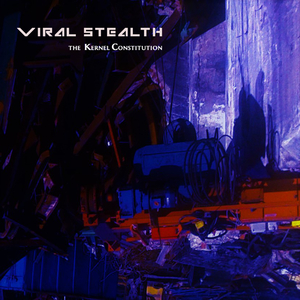 Viral Stealth is a brutally honest Electro-Doom duo, consisting of professional musicians, one having studied composition and electronic music for Karlheinz Stockhausen in Cologne, Germany. Their music is reminiscent of early doom metal pioneers Black Sabbath and Pentagram. They live alone in isolation, and in total withdrawal from society. And they hardly never physically meet each other and jam together, but program their music as if software, like EBM-industrial acts like Nitzer Ebb and Front Line Assembly. Thereby pioneering the Electro-Doom genre, bridging the gap between metal and hardcore electronic music. The band members claim to accidentally be caught in a strange state of symbiosis - actually being the same person - and that they therefore create their music out of a common place of non-realtime virtual existence.

Their first album - The Kernel Constitution - is a rough and sincere lament on a personal history of physical abuse and torture during childhood followed by years of sufferings from psychosis, mental disease and hospitalization. But the album is also a philosophical search for a true human essence (the kernel) rejecting thousands of years of mechanism and materialism in western culture. The album’s song structure is divided into two parts, as a 12 inch vinyl with a side A (“First Declaration”) and a side B (“Final Declaration”), each in turn made to represent a psychic state versus a resistance and awakening.

Viral Stealth on Swedish Electro Vol. 3, to be available worldwide 5th of Dec on https://swedishelectroscene.bandcamp.com/